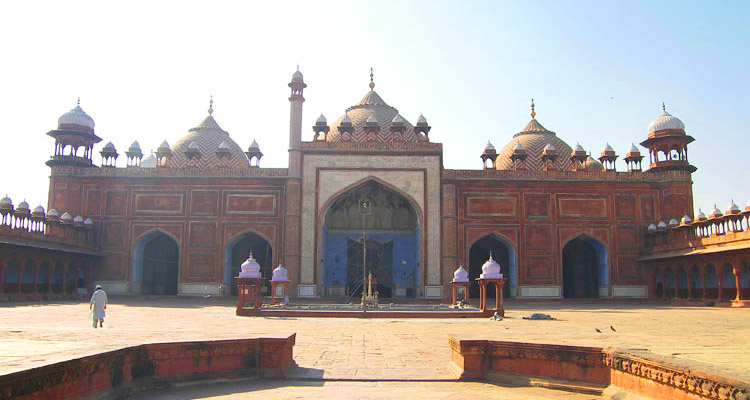 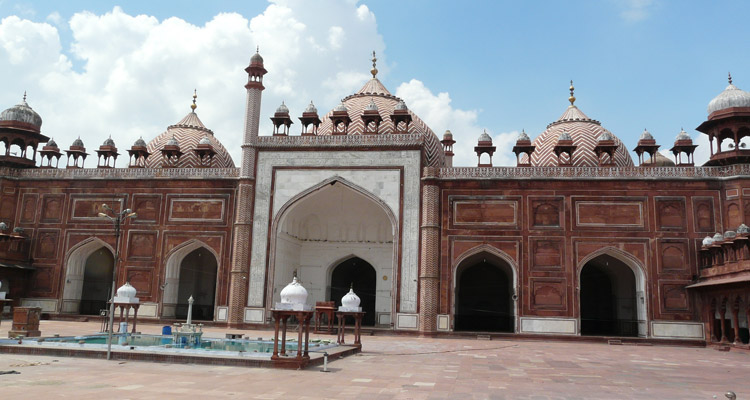 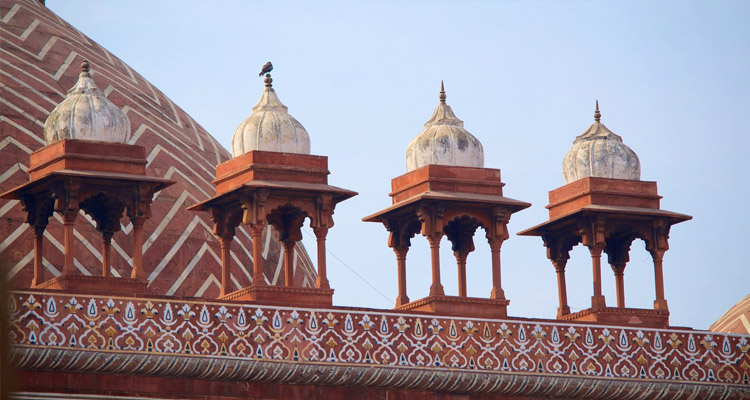 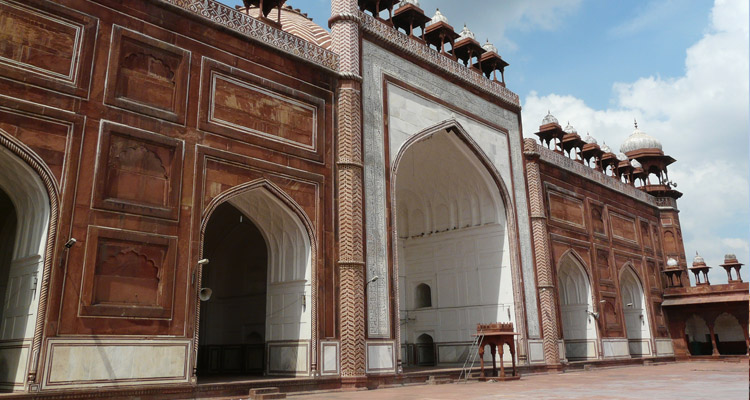 About Jama Masjid in Agra
During the Mughal era, especially in the 16th and 17th centuries, Agra was the capital city of India and thus held an important position in the Indian Map.

Agra has to some extent become synonymous to the grand Taj Mahal - one of the Seven Wonders of the World. Many more important places including forts, palaces, mosques and the likes were built here that boasts of high Mughal architectural styles. One such place is the Jama Masjid or the Jami Masjid built in 1648 by Emperor Shah Jahan and dedicated to his loving daughter Jahanara Begum. The mosque also known as the "Friday Mosque" is one of the largest mosques in India and most sought after pilgrimage site by the devotees. It is also one of the most visited tourist destinations in Agra district. Some of the designs of the mosque reflect beautiful Iranian architecture.

It is situated opposite the Agra Fort right in the middle of Fatehpur Sikri. Earlier there was a Tripolia Chowk, octagonal in shape in-between the Jama Masjid and the Delhi Gate of the Agra Fort. Later on it was demolished to build Agra Fort Railway Station.

History and Architecture
Built by Shah Jahan in 1648, it took six years and 5000 workers to complete the mosque. It rests on a high plinth with five arched entrances leading to the courtyard. On its right side is the Jammat Khana hall. Next to the hall is the Zenana Rauza, the Tomb of the royal ladies. The Tomb of the sacred Sufi Saint Sheikh Salim Chisti is within the compound of Jama Masjid. History says that Emperor Akbar, the greatest and most renowned Mughal Emperor of the dynasty had no heir. He earnestly sought blessings from the Sufi Saint and through the divine grace of the Saint the Emperor was blessed with a son. He named his son Salim after the name of the saint who after Akbar became the emperor and was famously known as Emperor Jehangir. As mark of true gratitude and respect, the Emperor Akbar dedicated a magnificent city in honor of the Sufi saint and a mosque. The emperor also built a royal tomb of the Saint made of red sandstone after his death. Later on Emperor Shah Jahan erected another tomb of the Saint with white marble. The beautiful paintings, the intricate designs of the latticework, glazed tiles adorned with floral motifs of myriad colors, carvings, the pillared Dalan, the Chatri on the roof, the geometrical designs in the central arch of the Iwan, the beautiful Chhajja makes it architecturally rich and stand apart on its own right.

The main entrance of the masjid is through the eastern side. There are cloisters with designed arches supported by pillars. The prayer chamber has a large entrance with an arched iwan in the center. An iwan is a rectangular hall with three walls having one side fully open. It is decorated with kiosks alternatively with slender turrets. Out of the three domes of the masjid the one crowning the prayer chamber is the largest and highest. The three domes have inverted lotus carved and kalash finials on the top. Narrow zigzag designs are made by alternating white marble and broad bands of red sandstone. In the center of the courtyard there is a fountain with four kiosks in four corners. A beautiful mihrab and pulpit in white stone grace the interiors of the western wall. The archway of the central portal has a white marble which is inscripted with inlaid blackstone. The inscription praises Shah Jahan and his daughter Jahanara. This beautiful mosque with its awesome architecture was compared with Baitul-Mamur considered to be situated in the fourth sky decorated with rubies and pearls.

The mosque has a capacity to accommodate 10,000 people at a time. While visiting the masjid complex one need to dress up accordingly and knees should be properly covered. It is one of the important landmarks of the city. Crowded bazaars surround the mosque that serves as a reference point for the newcomers or tourists. The street plans remain the same as in the days of the Mughals.